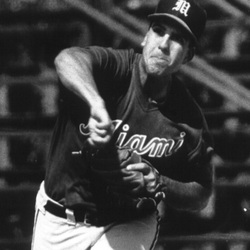 Jorge Fabregas was one of the most feared hitters in Ron Fraser's Hurricane attack for three seasons from 1989-91. By the time he was a junior, Jorge was a legitimate candidate for the Dick Howser, Bob Smith and USA Baseball Golden Spikes awards. Fabregas played third base and catcher.

During his three-year career, Fabregas, the Miami, Florida resident, hit .331 with 120 runs scored, 201 hits, 329 total bases, 50 doubles, nine triples, 20 home runs, 139 RBI's and six stolen bases. His 50 career doubles still ranks eighth on the UM career list. Jorge was named to The Sporting News Second-Team All-America list as a third baseman in 1990, his first full season at the position. That 1990 season also saw Jorge selected as the Arnold Novins Most Popular Award, as voted on by the fans. During his final season in 1991, Jorge hit for a .315 average with 49 runs scored, 74 hits, 60 RBIs, 20 doubles, one triple and nine home runs. Jorge Fabregas just began his tenth season in the Major Leagues, and is currently playing in the Tampa Bay Rays organization.