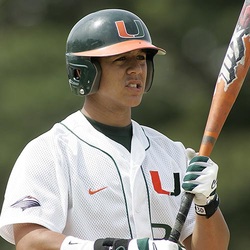 Jon Jay practically grew up in the shadow of Mark Light Stadium, so it was natural for him to stay close to home and play for the Hurricanes. As a senior at Christopher Columbus High School, he led the team to the State 6A Championship and was named All-Dade County and second team All- State.

Jon would produce one of the best freshman seasons in Miami history in 2004. He posted a .368 batting average, 14 doubles, 56 runs batted in and six home runs, including a memorable walk-off grand slam to beat future Major League pitcher Jered Weaver and Long Beach State. Jay was named a Freshman All-American by Collegiate Baseball and Baseball America, and was selected for the All-Tournament teams of both the Atlantic Regional and College World Series.  As a sophomore in 2005, he would garner first team All-ACC honors by leading the Canes with a .408 batting average, becoming one of only nine players in UM history with more than 200 at-bats in a season, to top the .400 mark. He also led the team with a .490 on base percentage, had 17 doubles, knocked in 52 runs and was named a third team All-American by Louisville Slugger. That summer, Jon would play for Team USA.

In 2006, as team captain, he turned in another stellar performance, leading the team with a .361 batting average, 31 stolen bases, 77 runs scored and a .490 on base percentage. Once again, he was selected first team All-ACC, second team All- American by Baseball America and was voted UM’s Most Valuable Player. For his UM career, Jon has the fourth-highest batting average (.378) and the fifth-highest hit total (254). He also had two, 17-game hitting streaks, both listed in the top ten in school history.

Selected in the second round (74th overall) by the St. Louis Cardinals in the 2006 MLB Draft, Jay was a valuable member of the Cardinals’ 2011 World Championship team. He was traded this past off-season to the San Diego Padres and is beginning his seventh year in Major League Baseball. Jon is married to Nikki (Stecich), a UM graduate.