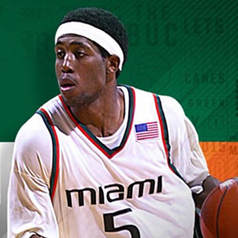 Regarded as one of the most versatile players to ever play for the Hurricanes, John Salmons came to Miami with an outstanding resume and continued to improve it throughout his UM career.  Recruited by UMSHoF member Coach Leonard Hamilton out of Plymouth-Whitemarsh High School in Philadelphia, he was named the Player of the Year by the Philadelphia Inquirer, as well as the Montgomery County Player of the Year and a first team (PA) All-State selection.

Starting his career as a reserve in his freshman year (1998-99), John would become a starter later that season and helped the Canes to the NCAA Tournament, where they collected Miami's first-ever NCAA tournament victory, a 75-54 win over Lafayette, and a then-school record-tying 23 victories.  As a starter for all games his sophomore season (1999-2000) at forward, he averaged 9.4 points, 5.4 rebounds, 1.9 assists and 1.5 steals per game as the Canes matched the 23 victories and advanced to the NCAA Tournament for a third straight season.

During the 2000-01 season, Salmons was named a third team All-Big East selection, starting all 29 games at shooting guard, averaging 13.3 points, 6 rebounds, 4 assists and 2 steals per game, raking second in scoring, but first in rebounds, assists and steals for Coach Hamilton's Canes.  His final year (2001-02) saw him named a second team All-Big East selection and win the Big East Sportsmanship Award, Miami's only recipient ever.  He led the Canes with 6 rebounds, 6.1 assists and 1.8 steals, while finishing second in scoring (13.1 pts. per game) as Miami won a then-school record 24 games and advanced to the post-season for the fifth straight year.

Salmons graduated Miami with a Bachelor in Criminology degree and was picked in the first round (26th overall) in the 2002 NBA Draft by the San Antonio Spurs.  He would spend the next 13 seasons playing for six different teams, helping them to the NBA playoffs five times.  In 2016, he was named an Atlantic Coast Conference (ACC) Legend.  Now retired, John lives with his wife and four children near his hometown of Philadelphia.