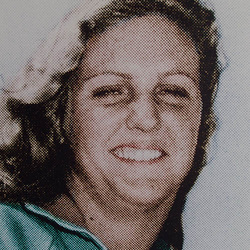 Jodi Yambor earned six individual All-American honors and nine as part of relay teams during her Hurricane career. She won consecutive national championship titles in 1976 and 1977 as part of the 200 meter medley relay team that set new American records each year. Jodi placed sixth in the nation in the 50 meter freestyle(:24.55) at the 1977 Association of Intercollegiate Athletics for Women (AIAW) Championships and helped lead the Hurricanes to back-to-back national championships in 1975 and 1976.