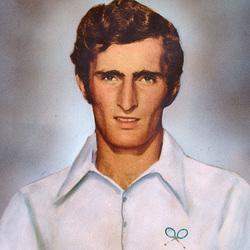 A two-time All-American at Miami in 1974-75, Joaquim Rasgado literally has tennis in his blood. His parents, both avid tennis players, met on one of Brazil's red clay courts. being in constant contact with the sport since a young age, Rasgado a native of Rio de Janeiro, quickly became one of Brazil's premier junior tennis player and eventual National Champion.

After graduation, Rasgado joined the professional touring circuit, and was a member of the Brazilian Davis Cup team. In 1981 Rasgado was named the Florida Men's Tennis Player of the Year. He has been ranked number one in the 35-and-over class by the United States Tennis Association since '88.