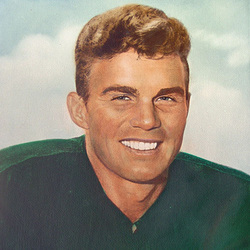 Jim came to the University of Miami  in 1947 after a stellar high school career at Miami High. As a junior and senior Dooley was a true "sixty minute man" playing both offense and defense. He set several records during his UM days, 17 interceptions on defense and over 1,000 yards rushing on offense. In 1951, Dooley intercepted 10 passes and was named first-team All-American by the associated Press. Dooley played in both the 1951 Orange Bowl Calssic and the 1952 Gator Bowl where he earned MVP honors and setting a Gator Bowl record with 4 interceptions. He also played in the 1952 Senior Bowl and the College All-Star Game.

Jim has also been inducted into the Gator Bowl Hall of Fame, the Florida Sports Hall of Fame and the Univesity of Miami Ring of Honor, to which he is a member of it's first induction class.  In October, 2010, Jim was honored as a Miami Sports Founder by the greater Miami Chamber of Commerce.