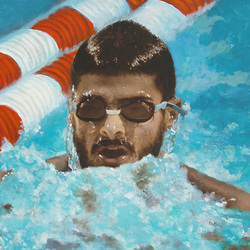 Jesse Vassallo joined the Hurricanes' swim team in 1981 as one of the most successful swimmers in the country. He won his first race in the 400 individual medley at the age of 15 and did not lose a race for five and a half years, winning twenty major titles and setting three world records before he turned 20 years of age.

During his career, Jesse was a two-time All-Amerian, in 1981 and 1982 and was selected for the Pan-American team and was a member of the 1980 Olympic team.