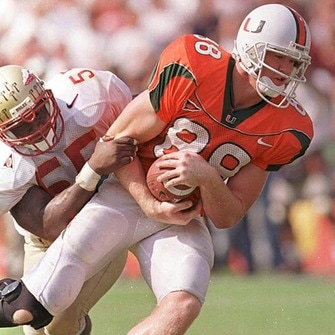 His stay in Coral Gables may have been for only two seasons, but what an impact tight end Jeremy Shockey and the 2000 and 2001 Hurricanes made on college football. A native of tiny Ada, Oklahoma, and Ada H.S., Shockey was selected All-State as a senior after catching 50 passes for 1,108 yards and five touchdowns, plus returning four punts for scores. But Jeremy’s journey did not immediately take him to a traditional Division 1 power, instead leading him to Northeast Oklahoma A&M Junior College, where after one solid season (33 catches, 484 yards and seven TDs) he was spotted by then-Canes offensive coordinator Larry Coker. Offered a scholarship to Miami, he made the most of his time in the Sunshine State.

In 2000, sophomore Shockey made his biggest impact in the biggest games. Jeremy caught three passes on UM’s game-winning drive against No. 1 Florida State. The third of those grabs was the stuff of legends...a 13-yarder from quarterback and UMSHoF member Ken Dorsey in the final minute to propel the Canes past the Noles 27-24 and letting the country know that The U was back as a national powerhouse. He also turned heads with his 44-yard, tackle-breaking, highlight-reel TD as the Canes crushed No.2 VirginiaTech 41-21 before a sold-out Homecoming crowd in the Orange Bowl. Despite not starting a single game, conference coaches selected him All-Big East.

In the 2001 National Championship season for now-Head Coach Coker, Shockey led the Canes with 45 receptions, good for 604 yards and eight touchdowns, five of those catches for 85 yards and a score in the Rose Bowl National Championship game. He was a finalist for the Mackey Award, given to the top tight end in college football. Shockey was named First Team All-American by CNNSI and Second Team All-American by the Associated Press, ABC Sports and CBS SportsLine, and First Team All-Big East for the second year. He left UM a/k/a Tight End U second among tight ends in career touchdowns, sixth in catches and sixth in receiving yards.