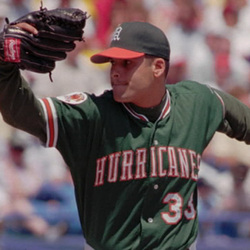 Arteaga played for the Hurricanes from 1994-1997, helping UM reach the College World Series four straight seasons. He left Miami as the program's all-time wins leader with 43 and the all-time starts leader with 72. Arteaga ranks second for innings pitched in a career with 458.1. He is also fifth on the all-time strikeouts chart with 343 career Ks. Miami retired Arteaga's No. 33 on Feb. 5, 2003, prior to the season opener with Florida International. "It is an honor to be a part of the best program in the country," Arteaga said. "I felt that when I played, and the same now that I'm a coach."

As a member of the Miami baseball coaching staff, his main responsibilities include the management and development of the pitching staff and assisting in recruiting and scheduling. Arteaga has tutored two of Miami's three pitchers drafted in the first round of the Major League Baseball Amateur Draft since 1987, including Chris Perez in 2006 and Cesar Carrillo in 2005. Perez, who came to Miami as a starting prospect was aided by Arteaga in his transition to becoming one of the country's top closers. His 2006 staff, composed almost entirely of first-time starters, recorded five shutouts, the most by a UM staff since the 1998 season. UM also recorded Miami's first postseason shutout on the road since 1976 with a 7-0 win against Ole Miss in the 2006 Oxford Super Regional.Four pitchers from Arteaga's 2005 pitching staff signed pro contracts following the season, including the school's first pitcher drafted in the first round since the 1991 season, Carrillo. Arteaga also played a major role in Carrillo's career development and run at the NCAA record books. Carrillo, who was the 18th overall pick in the 2005 draft, ended with a career record of 25-3, was an All-American and a finalist for the Dick Howser Trophy and the Roger Clemens Award as college baseball's best pitcher in 2005.The 2004 Miami pitching staff produced the best team ERA in (3.73) since the 2000 season (3.72). Freshman Danny Gil matured quickly to earn freshman All-America honors with an 8-0 record and five saves out of the bullpen. Arteaga began the 2003 season in the spring training camp of the Texas Rangers. Beginning his sixth year in pro baseball, the left-handed Arteaga was vying for a spot on the Rangers pitching staff. He had spent the previous year with the Houston Astros' Triple-A organization the New Orleans Zephyrs. Miami Head Coach Jim Morris named Arteaga the Hurricanes' next pitching coach on March 4, 2003, nine games deep into the season. "J.D. (Arteaga) was the perfect person to come in at that point and time," Morris said. "It was a crucial time in our season and it was a tough time right in the middle of the season for this change to be made. J.D. is a guy that knows our system, played in our system, knows our players and he commanded instant respect from our players. He has all of the things you could possibly want in the person you are bringing in. "He was probably the only person that could come in and pull off what he did during the 2003 season." Arteaga's first pitching staff with the Hurricanes proved to be a key formula in Miami's run to the 2003 College World Series. The UM staff compiled a 4.41 ERA, helping the Hurricanes post a 45-17-1 record and finish fifth in the CWS. Arteaga's style and approach to pitching was vital in J.D. Cockroft's development into the ace on Miami's 2003 club. Cockroft, a crafty left-hander, took Arteaga's advice to heart and used his devastating changeup to propel him to an 11-3 record with a 2.72 ERA in a team-high 119 innings, including three complete games and one shutout. "J.D. (Arteaga) came in and did a tremendous job of keeping the pitchers together," Morris said. "The fact is, pitching is 75 percent of the game and he has come in and done an outstanding the last four seasons."

A 26th round draft choice by the New York Mets, Arteaga spent five seasons in the Mets' and Houston Astros' organizations. He had signed on with the Texas Rangers' organization in the spring of 2003, prior to accepting his post with the Hurricanes. He spent his last professional season with the Astros' Triple-A franchise New Orleans Zephyrs, compiling a 9-10 record with a 4.29 ERA in 15 starts and 42 appearances. "It was a very tough decision to give up a dream (of playing in the major leagues) for a dream job," Arteaga said. "I weighed out both options and the opportunity for me here was just too good." The left-hander came to the Hurricanes out of Westminster Christian in Miami. He won a career best 12 (12-1) games as a junior in 1996 and came back to go 11-4 as a senior. Arteaga threw three complete games at UM and struck out career-high 11 batters on two different occasions (FSU, 4/16/95 and George Washington, 2/16/96). He posted an 11-3 record as a sophomore in 1995 and a 9-1 mark as a freshman. Arteaga earned his bachelor's degree in criminal justice from the University of Miami in 2002. He is married to the former Ysha Schettini and the couple has two children, a son, A.J. and a daughter, Ariana.