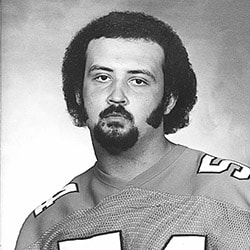 Jay Brophy was the heart and soul of Miami's 1983 National Champions defensive unit, but to say the road to the title was not smooth for him is an understatement.  He came to Miami as a heavily recruited tight end from Akron, Ohio and grew frustrated after seeing little playing time and then being redshirted. He decided he would go back home and work in a tire factory for $5 an hour...something that made him even more frustrated and missing football.  Fortunately for him, and the Hurricanes, UM Sports Hall of Fame member Coach Howard Schnellenberger gave him another chance and switched him to linebacker/ And the rest, as they say, is history.

In 1981, he took to learning his new position and showed promise with an 11-tackle performance in Miami's upset win over Notre Dame.  As a junior in 1982, Jay led the Canes with 135 total tackles (89 solo) including big games against Florida (16 tackles and an interception), Mississippi State (18 tackles, interception and fumble recovery) and Maryland (17 tackles).  He received the Jack Harding Award as Miami's Most Valuable Player.   During the 1983 championship season, Brophy finished 2nd in tackles with 133, but his 77 assisted tackles set a then-school record for a single season.  He also tied for the team lead with 3 interceptions.  He had 17 tackles in the bowl-clinching victory over FSU.  Against West Virginia he had 15 tackles, an interception and blocked a field goal.  Following the Championship year, Jay was named First Team All American by The Football News, Miami's only All-American.

He would be drafted in the 2nd round (53rd overall) of the 1984 NFL Draft by the Miami Dolphins and would play 4 seasons in the league.  After the NFL, Jay got into coaching high school football and in 2001, he was the head coach at St. Vincent - St. Mary High School for an Akron teenager named LeBron James. Brophy currently is head football coach for the Manchester Panthers high school football team in his hometown of Akron.