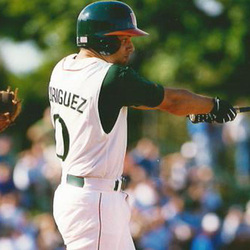 Having been taught how to play baseball at a young age by his father and brother, it was no surprise that Javy Rodriguez would become a four-year starter at Miami's Gulliver Prep. There he became a four-year First Team All-State selection and a four-year All-Dade County pick by The Miami Herald. Rodriguez compiled an incredible 74-game hitting streak that spanned from his freshman year into his senior season. Showing his versatility, Javy also pitched and posted a 25-4 won-loss record with a 1.93 earned run average. Hurricane Baseball Coach, UMSHoF member Jim Morris knew he had an all-around gem when the prize recruit Rodriguez arrived at then-Mark Light Field.

Javy saw playing time at both second and third base during his 1999 freshman year, batting .345 as Miami claimed its third National Championship, the first for Morris. Following the departure of UMSHoF member Bobby Hill, Rodriguez settled in as the regular shortstop in 2000 and enjoyed a fine sophomore season, batting .364 with 82 hits, 52 runs and a team-leading 27 stolen bases. Javy set the school record and led the NCAA in stolen bases in 2001 when he tallied 66. He was named team Most Valuable Player with his .382 batting average, 92 hits, four triples and 127 total bases, and became the first and ONLY Miami player in the 60-60 Club (66 stolen bases, 60 runs batted in). At the College World Series in Omaha, he hit .354, including two hits and three runs scored as the Canes defeated Stanford 12-1 for their fourth National Championship. As a senior in 2002, always the team player, Rodriguez spent time at both shortstop and second base and again led UM in batting average (.376) runs (57), hits (99) and stolen bases (37), and was named the team MVP for the second consecutive season. For his career, Javy is second all-time in both stolen bases (135) and hits (321). He is third in at-bats (868), tied for fourth in total bases (427) and stands fifth in runs scored (201). His .369 career average is UM's all-time highest for a middle infielder.

Rodriguez was selected in the fifth round of the 2002 Major League Draft by the Anaheim Angels. He played three years with the Angels, working his way up to Triple-A. In 2005, Javy was traded to the Washington Nationals and forced to retire due to injury. He began coaching youth league teams and in 2009, he returned to Gulliver Prep where today he is the Head Boys' Baseball Coach. Thankful for the tremendous support of his family throughout his career, Rodriguez returned to the University of Miami and completed his Bachelor of Liberal Arts degree in 2011. He and his wife, Melissa, have one daughter, Lucia.