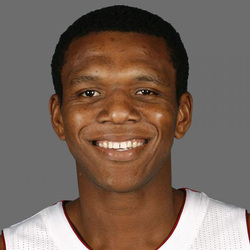 One of the finest all-around basketball players in UM history, James Jones showcased his talents at Miami's American High School. There he was named the 1998-99 State of Florida 6A Player of the Year as a senior, leading the Patriots by scoring 25 points, grabbing 12 rebounds and blocking 6 shots per game. And when he became a Hurricane the next Fall, his coach, UMSHoF member Leonard Hamilton, knew he had a talented individual, both on and off the court.

As a freshman, James made an immediate impact, helping the Hurricanes win the 1999-2000 Big East Conference Co-Championship and earn the school's first NCAA Tournament Sweet 16 berth. Although Coach Hamilton left UM after that historic season, James says that his first UM coach's guidance had a lasting impact on his life and career as demonstrated by Jones' increasing numbers with and influence on the Hurricanes basketball program each succeeding season. He averaged 12 points and 6 rebounds as both a sophomore and junior and upped his game to 17 and 6 as a senior. During his 2001-02 junior campaign, the Canes won a then-school record 24 games, a total not eclipsed until last season's Sweet 16 squad won 29 times. Jones is still listed in the UM record books as fourth in career blocks (192), seventh in career 3-point field goal percentage (.383), eighth in career free throw percentage (.831), 10th in career steals (137), 11th in career 3-point field goals made (124) and 14th in total points scored (1,356). He twice led Miami in rebounding and blocked shots, including his 2002-03 senior campaign when he also led the team in steals.

Drafted by the Indiana Pacers in the 2nd round/49th overall of the 2003 National Basketball Association's Draft, he played for the Pacers, Phoenix Suns and Portland Trailblazers before returning home. Signing with his hometown Miami Heat in 2008, Jones was an integral part of the Heat's current run as back-to-back NBA Champions. During the 2011 NBA All-Star Weekend, James won the Foot Locker 3-point contest by out-shooting the league's finest long-range marksmen, including defending champion Paul Pierce and current Heat teammate Ray Allen.

Ever active, Jones currently serves as the Secretary-Treasurer of the NBA Players Association, and can regularly be seen in the South Florida community performing charitable work. He recently served as honorary chair of the American Cancer Society's Relay for Life and has also received the Ted Arison Community Service Award. His James Jones Legacy Foundation helps disadvantaged youth find role models who will make a positive difference in their lives.

A four-time member of the Big East All-Academic Team (2000-2003), he was named a Verizon Academic All-American in 2003. James, who graduated with a Bachelor of Business Administration degree in Finance, and his wife Destiny, a 2004 UM graduate with an MS degree in Mental Health Counseling, have three children; Jadynn, James and Jodie.