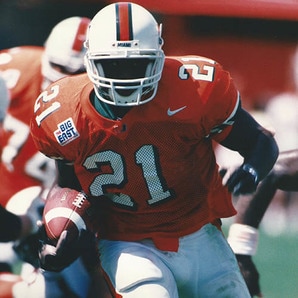 Though he shared backfields with some of Miami’s most celebrated runners who dominated the headlines, James Jackson was a true workhorse for the Hurricanes and ranks among the best-ever to play for the Orange, Green and White. A multi-talented back from Glades Central H.S. in Belle Glade, FL, James was also a standout baseball player drafted in the 1st round of the Major League Baseball Draft by the Seattle Mariners, but he chose football and the Canes over the diamond.

After redshirting the 1996 season, James made his mark the next year by eclipsing UMSHoF member Chuck Foreman’s freshman record of 557 yards set in 1969. Jackson rushed for 596 yards and six touchdowns while averaging 7.3 yards per carry. His 187 yards on 18 carries against Temple was, at the time, the fourth-highest single game total in UM history. Backing up UMSHoF member Edgerrin James as a sophomore in 1998, Jackson rushed for 545 yards on 82 carries for a 6.6 per carry average. In 1999, freshman Clinton Portis got the headlines, even eclipsing Jackson’s two-year old freshman record, but James did his usual workmanlike job despite missing three games due to injury, gaining 782 yards on a team-leading 169 carries.

As a senior in 2000, UMSHoF member Coach Don Soldinger picked Jackson to be his starter and James did not disappoint. He became only the fth Hurricane to rush for over 1,000 yards in a season, gaining 1,006 with 11 touchdowns and was named second team All-Big East. The Canes went 11-1, handed Florida a beating in the Sugar Bowl and finished No. 2 in the polls to continue UM’s comeback climb to national prominence and lay the foundation for the 2001 National Championship season.
​
For his career, Jackson’s 2,953 yards ranks fourth in school history, only seven yards behind his former backfield mate, Edgerrin James. His 541 rushing attempts are second-most, his 29 rushing touchdowns rank fourth all- time and his 32 overall TD’s are third in Hurricane history.
Drafted in the third round of the 2001 National Football League Draft by Cleveland, James spent five years in the NFL with the Browns, Green Bay and Arizona. Jackson and his wife Greta have 4 children, Jasmin, Wynter, Rhian, and Tyler.