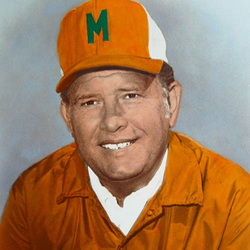 After an all-state career in South Carolina, Harold "Hal" Allen played tackle at UM under Coach Andy Gustafson from 1949-1951.  He is a former teammate of fellow inductee Charlie George and played in the 1951 Orange Bowl and the 1952 Gator Bowl.

Allen was head coach of Key West High from 1957-1964, where he coached former Hurricane QB George Mira.  Allen returned to UM as an assistant coach in 1964, serving for 19 years under seven head coaches, before accepting an administrative position in the athletic department in 1984.

In all, Hal spent 32 years as a football coach in the state of Florida.  At UM, he served under Charlie Tate, Walt Kichefski, Fran Curci, Pete Elliot, Carl Selmer, Lou Saban and was part of the 1983 National Championship team as Howard Schnellenberger's Defensive Line Coach.

May 18, 2004|By Brian Sumers Staff WriterHarold "Hal" Allen, a longtime assistant football coach at the University of Miami, died Monday of heart failure. He was 77.
As defensive line coach from 1964-1983, Allen worked with 15 future NFL draft picks, including Ted Hendricks, a 1990 inductee into the Pro Football Hall of Fame.
"When I think of Harold Allen, I think of a consummate teacher, a persistent pain in the butt and a guy that had the respect of his players all the time," said Art Kehoe, the Hurricanes offensive line coach, who played at UM in 1979-80.
Born in Florence, S.C., Allen spent nearly half his life with the Hurricanes, lettering in football in 1950 and 1951 and serving as assistant to the athletic director from 1984-92.
Even after retiring, Allen would return to watch fall and spring practice, Kehoe said.
"It was his life," said Pat Allen, his wife of 25 years. "He worked for seven football coaches at the U of Miami and when everyone was fired, he was still there."
Allen, a member of the UM Athletic Hall of Fame, cherished his 1983 championship ring, his wife said. "He never thought it would ever happen."
Allen spent his final years playing golf at Deering Bay Country Club in Coral Gables and watching professional and college football, his wife said.
At Allen's request, ashes will be strewn around the Orange Bowl, "because a little bit of him died there every year," Pat Allen said.
"It's just the way it should be. Preferably right before that Florida State game. Then there's no way we can lose."
Visitation is 6-8 Friday at Stanfill Funeral Home in Kendall, with a memorial service following. The family suggests memorial contributions be made to the University of Miami Athletic Department.
In addition to his wife, Allen is survived by daughters Donna Curlin, Diane Allen and Chrissy Brunson; sons, Thomas and James; and four grandchildren.