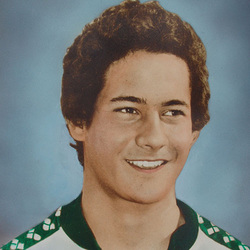 All athletes share the same desire to be the best in their respective sport, but Mission Viejo, California native Greg Louganis achieved this goal and much more.  He became the best ever.  Long before Louganis set foot on the University of Miami campus, his name was synonymous with diving excellence, having captured a silver medal at the 1976 Olympics.  At UM he tore through the college ranks, winning three separate National Championship titles and twice being named an NCAA All-American.

After leaving the University of Miami, Louganis continued to rewrite the international record books.  In 1984 Louganis became the first male diver since 1928 to win both events, the 3-meter and 10-meter, in Olympic competition, each by the largest margin of victory in modern Olympic history, to that date. The five time World Champion was awarded the Jesse Owens Award in 1987 as that years top amatuer athlete.  Louganis put his name in the record books again in 1988 by becoming the only male athlete to ever win back-to-back titles in Olympic competition.

Acknowledged as the greatest diver in history, his records may never be broken and he will be remembered as the best diver in Hurricane history .