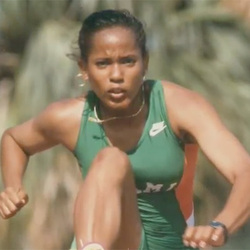 An elegant runner and fierce competitor, Gillian Russell was a threat to win every event she entered. In an era when many track athletes were either indoor or outdoor specialists, Russell won titles and set records on any track at any time.

She won NCAA All-American honors an astounding nine times: three times for 55m indoor hurdles, four times for 100m outdoor hurdles, and twice as a member of national championship winning Hurricane 4x100m relay teams. Russell's career spans not just her exemplary four-years (1991-1994) as a member of the University of Miami's women's track team, but several continents as well. Prior and during her UM career, Russell was the world junior champion in hurdles in 1990 and 1992, as well as a member of the world junior champion Jamaica team which won the 4x100m relay team in both of those championships. Russell also competed in the 1993 and 1995 World Track and Field Championships, and was a member of Jamaica's 1992 Barcelona and 1996 Atlanta Olympic Teams. Russell completed her very special Hurricane career with five NCAA championships, six Big East championships and a slew of athletic and academic honors.

A native of Kingston, Jamaica, Russell now calls Miami home. Russell earned her Bachelors degree in Finance and Business Administration from the University of Miami in 1996.