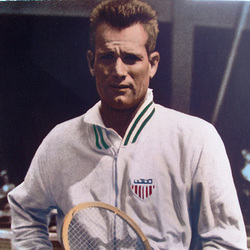 What else can be said about Gardnar Mulloy other than he was the greatest tennis player in University of Miami history. There has never been a greater tennis player to don the UM colors.

Mulloy was inducted into the UM Sports Hall of Fame in its inaugural class in 1967.  Several of his trophies and tennis racquets are on display.


Below is a link to a video when Gardnar was inducted into the Miami DadeCounty Public Schools Alumni Hall of Fame at age 101...

Below is the Miami Herald story written by Michelle Kaufman on November 15, 2016....

Today’s tennis players and the majority of fans may be too young to remember Gardnar Mulloy, but his resume is unparalleled. His life experiences — including memorable conversations with Queen Elizabeth II and President Bill Clinton — were rich enough that he published two memoirs.

READ MORE: Tennis legend the oldest recipient of French Legion of Honor
He competed for 75 years, won senior titles until his late 80s, and continued shuffling around local courts well into his 90s. During his illustrious career, Mulloy won five Grand Slam doubles titles, including a Wimbledon crown at age 43. He reached No. 1 in the world rankings, won 129 national titles and was enshrined in nine Halls of Fame, including the International Tennis Hall of Fame, which in 1996 started the Gardnar Mulloy Cup for players 80-and-over.

Mulloy rubbed elbows with presidents, royalty, movie stars and the world’s best-known tennis players. He also was a lawyer, the University of Miami tennis coach, an author, and he served in the U.S. Navy in World War II, seeing action in Italy and North Africa. He was a lieutenant and a commanding officer of a landing ship tank: the U.S.S. LST 32, leading a crew of 13 officers and 154 men.


READ MORE: Mulloy honored with his own street
Mulloy, a graduate of Miami High and UM, grew up near the Miami River, on Northwest Ninth Avenue in historic Spring Garden, where in 1915 his father built a house, and in 1923 added a tennis court. It was one of the city’s first courts.

He told stories of Seminole Indians canoeing up the Miami River and setting up camp in his neighborhood. He used to sneak over to the bootleggers’ headquarters down the street and earn a buck a day for helping repair their speedboats.

In 2013, a section of Northwest North River Drive was renamed Gardnar Mulloy Way. He remained in the neighborhood his entire life, in a modest three-bedroom home next door to the one he grew up in.

The house could pass for a tennis museum. Hundreds of trophies, plaques, old photographs and film reels clutter the living room. The remains of the original family court could be seen in the backyard.

After the street naming ceremony, Mulloy reminisced about his childhood — catching crabs, drinking fresh milk from a neighborhood cow and climbing a huge oak tree with Marjory Stoneman Douglas. When he was 10, he stayed overnight in the tree because the county was threatening to chop it down.

Mulloy became a legend in the area’s tennis leagues and played No. 1 at Miami High. They knew him at Flamingo Park, the Surf Club, Coral Gables Country Club and Moore Park. Henderson Park was his home court.

“Henderson Park was the hotbed,’’ Mulloy said. ‘They were clay courts, and some old geezer was in charge of drawing the lines. You’d stop midway through a match and yell, ‘Hey, how ’bout a line?’ and he’d come over and pour the powder down. Half the time they were crooked, but nobody seemed to care.’’

Mulloy went on to establish the University of Miami’s first tennis team while he was on a football scholarship in 1935. He also boxed for the university. His first year as Hurricanes tennis coach, the team took road trips around Florida and to Havana. The next year, the players piled into two cars and headed north to play Yale, Harvard, Columbia, Princeton, and Cornell.

“We clobbered everybody,’’ said Mulloy, who also wrote and transmitted game stories to The Miami Herald via Western Union.
Among his UM recruits was Ecuadorean great Pancho Segura, who went on to win NCAA titles in 1943, 1944 and 1945.

The Wimbledon trophy, a small silver bowl, was his most prized possession.
Equally valuable were his memories. Mulloy remembered being stopped on the street in Miami, during the era he played mixed doubles with black-American legend Althea Gibson, and being asked, ‘’What’s a Southern man like you doing playing with that [N-word] woman?’’

He recalled being sneered at by a group of white men on a boat to Havana after he chatted with a black man on board. The man was Jesse Owens, who was headed to the same sports festival as Mulloy.

Or the time in the late 1960s when he and Arthur Ashe showed up at a tournament in Jacksonville and Mulloy was offered a swank cottage while Ashe was told he would have to stay in a motel on the south side of town.

“Arthur was the top seed in the tournament, and they weren’t going to let him have a cottage like the rest of us,’’ Mulloy said. ‘’I finally convinced them to let him stay with me in our cottage. Hard to believe, huh? But it was a different time.’’

He told the New York Times in 2005 that “the most impressive incident’’ of his life was on Center Court at Wimbledon in 1957 as Mulloy was receiving the cup for the men’s doubles title from Queen Elizabeth II.

Years earlier, at a pre-Wimbledon garden party, Mulloy was seated next to Elizabeth, who was then the crown princess. Mulloy asked her why she had not been sitting in Wimbledon’s royal box.

Before Elizabeth could answer, the hostess of the party, Lady Crossfield, replied. Mulloy said she said: “My dear Mr. Mulloy, you must remember those in the royal family have many confining obligations and duties to perform and therefore cannot possibly schedule everything.’’
’’Oh,’’ Mulloy replied, “I thought perhaps [the princess] wasn’t able to get tickets, which I would be happy to provide.’’

In 1957, when Queen Elizabeth presented the doubles trophies to Mulloy and Patty, Mulloy asked if she remembered him.
“Yes, Mr. Mulloy,’’ she replied. “I remember you quite well. As a matter of fact, I had difficulty getting in today as you forgot to leave me tickets.’’
Mulloy also recalled meeting President Clinton in the mid-1990s at a senior event in Washington, D.C. When he walked up to Clinton to introduce himself, the President said he knew exactly who Mulloy was, that he had followed his career when he was a child.

He told the New York Times in a 2010 interview: “[Federer’s] not only a great player, but he doesn’t overact after he wins.

“After winning a point, these guys will go onto a bunch of emotions, which is an insult to an opponent. I can’t stand the pumping and yelling and look-who-I-am approach. Every picture of a tennis player now has them pumping their arms, with their mouths wide open.’’

He also complained that “They take too much time between points. They bounce the ball a half dozen times, there’s very little net play. I just don’t care for the way they play.’’

Mulloy said his secret to longevity was his healthy lifestyle. In addition to a lifetime of athletics, he was a vegetarian. He avoided sugar, soda, coffee, tea and alcohol. He got tipsy just once in his life, during college, he said.

He told the New York Times in 2005 that the five pleasures of life are: “Eating, exercise, sleeping, bathing and sex.’’
He was also an animal lover. In his later years he had five rescue dogs and four rescue cats around his house. In 1982 he mortgaged his home to start Pet Resuce, Inc. on a four-acre lot in Miami Gardens.

Mulloy was married for 55 years to Madeline Cheney Mulloy, who was a college homecoming queen and died in 1993. He first met his current wife, Jackie, in 1957 at Wimbledon. She went on to marry an Irish actor and a British philanthropist, Sir Robert Mayer. After Mayer’s death in 1985, she reconnected with Mulloy at a tennis event in Monaco and then turned up for his 90th birthday party. They married in 2008, when Mulloy was 95.