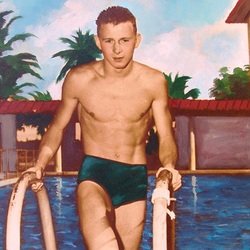 The year 1952 was a banner campaign for the late Gaither Rosser. That was his freshman year at UM and the Long Beach, California native, who came to Miami via Chicago, Illinois, immediately began to tear through competition. In that inaugural season, Rosser participated in all freestyle events, setting school records in the 50, 100, 220, 440, and was part of the record setting 400-yard relay team. In the '52 Southern AAU championship, Rosser captured first place finishes in all the free-style events. Rosser capped off his dream year by being selected as a member of the 1952 Unite States Olympic team. Upon his return to school, Rosser was considered by opponents a threat to capture every event in which he competed. At the Southern AAU championships in '53, he swam away with two first and one second place finishes.


By the time Rosser graduated from Miami he held every school record in the freestyle events.