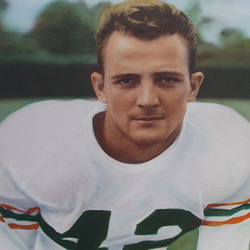 From the 1951 Miami Football Information Guide:

Left Halfback
"Frank Smith, 6 feet 1 inch tall, weighs 179 pounds and won all sorts of honors in four sports for East Chester High in Tuckahoe, N.Y.  He starred as a freshman and was a first stringer in 1948, but was out of school in 1949.  Back in school in 1950, Frank was headed for All American consideration when, after scoring 10 touchdowns in Miami's first five games and running such teams as Purdue and Pittsburgh ragged, he received a shoulder injury. Not until he came back to score twice against Clemson in the Orange Bowl game did he regain his early season brilliance.  At that, Smith gained 530 yards for Miami in part-time service, a figure topped only twice by Eddie Dunn and once--by two yards--by Jim Dooley.  He caught 15 forward passes and in general was a standout.  This year, his running should be even more elusive and he may also take on some punting duties as he was kicking brilliantly in the spring drills.  If he escapes injury, Smith will have to be given plenty of consideration in selecting the 1951 All American teams."