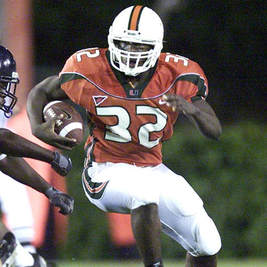 If you look up the word "tough" in the dictionary, don't be surprised to see Frank Gore's photo next to the definition.  The five-foot, ten-inch tailback out of Coral Gables High School may not have been the biggest, but has proven to be one of the toughest running backs in UM and pro football history.  One of the nation's most heavily recruited and highly regarded backs, he set a Miami-Dade County high school rushing record in 2000 with 2,953 yards and 34 touchdowns.

As a true freshman at UM, Frank backed up UMSHoF member Clinton Portis during the 2001 National Championship season, gaining 562 yards on just 62 carries for a 9.1 yards per carry average.  He had a breakout game with 124 yards on just 6 carries and 2 touchdowns against West Virginia.  He was named The Sporting News' Freshman of the Year.  In the Spring of 2002, Gore suffered a major knee injury and was redshirted for the 2002 campaign.

He came back strong in 2003, named the starting tailback and becoming the first Miami back ever to record three 100-yard rushing games to start a season.  He rushed for 468 yards on 89 carries (a 5.3 yd. avg.) and scored 4 touchdowns in less than 5 games before he suffered another serious knee injury in the second quarter of Miami's fifth game against West Virginia.   Prior to the injury, Frank had gained 127 yards on 24 carries with two touchdowns in Miami's 38-33 come-from-behind victory over the Florida Gators, including the game winning score on a 12-yard burst with 1:44 left in the game.

Determined to change his luck, Frank switched from jersey number from 32 to number 3 in 2004 and led the Canes with 945 yards rushing on 197 carries (4.8 yard avg.) and scored 8 touchdowns.  The season was highlighted by a 195-yard effort against Virginia, his career best, and the 8th-highest single game total in school history.  In just 28 games over his four year injury-plagued career, Gore rushed for 1,975 yards, good for tenth all-time in Miami history.  His career 5.68 yards per carry is sixth-highest at The U.

Frank was selected in the third round (65th overall) of the 2005 NFL Draft by the San Francisco 49ers and would go on to become the team's all-time leader in rushing yards and rushing touchdowns.  After 10 seasons with the 49ers, he spent 3 years with the Indianapolis Colts and this offseason signed to return home to play with the Miami Dolphins for 2018.

Gore retired in 2022 as the third all-time rusher in NFL history with 16,000 yards – Frank is one of only three players, along with Jim Brown and Barry Sanders, to record nine 1,000-yard rushing seasons.  He was named the 2016 Art Rooney Award Winner for Sportsmanship, voted on by his fellow NFL players.