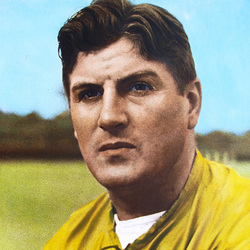 Eddie Dunn will go down in University of Miami history as one of the greatest running backs of all time.  His speed and quickness coming out of the backfield earned him numerous records and his is still in the Hurricane record book after sixty years of completing his eligibility.

In 1938 he gained 638 yards and set a single season scoring record with 14 touchdowns.  The 1938 season was highlighted by Miami's first victory over the hated Florida Gators, 19-7 in which Dunn scored all three Hurricane touchdowns.   Eddie Dunn will always be remembered as one of the greatest Hurricanes to ever wear the orange, green and white.

Dunn stayed at the University of Miami after his graduation and started his coaching career as an assistant under the late Jack Harding.  When Harding was called to service in WWII, Dunn filled his shoes as head coach in 1943 and 1944.  In 1946, while still an assistant football coach, Dunn organized and coached the Hurricane baseball team.

After years of coaching,  Dunn stayed close to Hurricane athletics, he became a member of the University of Miami Board of Trustees and his sons Bo and Gary both played for the Hurricanes, Bo later becoming a pilot in the Air Force and Gary playing in the NFL for the Pittsburgh Steelers.  Eddie and Gary Dunn were the first father and son duo to be elected to the University of Miami Sports Hall of Fame, as Eddie was elected into the first class of inductees in 1967 and Gary in 1993.