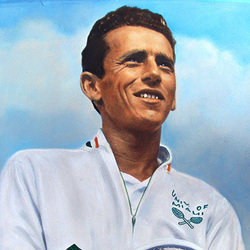 Edward 'Ed' Rubinoff (born July 12, 1935) is an American former male tennis player who was active in the 1960s.
Rubinoff was born on July 12, 1935 in Brooklyn, New York and at age 10 moved to Miami Beach. He became captain of the Miami Beach High School tennis team, and in 1952 won the National Scholastic singles and doubles titles. He received a full scholarship to the University of Miami.[1]
In 1952, he won the singles title at the Orange Bowl junior tennis tournament and in 1953, the mixed doubles title with Sylvia Ger.[2][3] In 1962 he won the doubles title with Gardnar Mulloy at the Monte Carlo Championships.[4]
His best performances at the Grand Slam tournaments were achieved in the mixed doubles where he was a runner-up at the US Open on three occasions. In 1963, he reached the final with Judy Tegart and lost to Margaret Court and Ken Fletcher in three sets. In 1964, Tegart and Rubinoff were defeated in the final by Margaret Court and John Newcombe. His last appearance in the final came in 1966 when he teamed with Carol Aucamp and were beaten in straight sets in the final by Donna Floyd and Owen Davidson.[5][6]
Rubinoff competed in the Wimbledon Championships in 1962 and 1963, entering all three events (singles, doubles, mixed). He reached the second round of the singles event in 1963. In the doubles, he teamed with compatriot Gardnar Mulloy in 1962 and lost in the second round to eventual champions Fred Stolle and Bob Hewitt. With Donna Floyd, he reached the third round in the mixed doubles in 1963.[7]
After his tennis career, Rubinoff enrolled at the University of Miami School of Law and graduated in 1966.[8] In the 1980s, he shifted his practice to plaintiff's work, representing individuals rather than insurance companies and corporate defendants.[1][9] In 1992, Rubinoff and Kutner founded the firm now known as Kutner, Rubinoff & Moss. Rubinoff is a member and former president of the University of Miami Sports Hall of Fame, a member of the Florida Tennis Hall of Fame, and is the chairman of the board of the Greater Miami Tennis Foundation. Rubinoff is married and has a son and daughter.