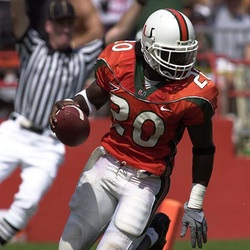 Edward Reed came to Miami after being named All State at both defensive back and as a kick returner, as well as being named the New Orleans Times-Picayune District Most Valuable Defensive Player for Destrehan High School in St. Rose, Louisiana.  He also excelled at track, qualifying for state in the javelin and 4 X 100 relay, and averaged 20 points on the basketball squad.  At Miami, he would become the key factor in a defensive unit that helped lead Miami to the 2001 National Championship.

Ed led Miami with 9 tackles (6 solo) in Miami's 37-14 victory over the Nebraska Cornhuskers to claim the Rose Bowl and the Hurricanes 5th National Championship.  He has excellent football instincts and a nose for the ball as demonstrated by his numerous big plays.  Who can forget his 80 yard dash to paydirt after Matt Walters interception and lateral that sealed the 18-7 victory for the Canes against Boston College, and kept the title hopes alive.

The accolades are many: named a Consensus (AP, AFCA, FWAA, Football News, Sporting News, Walter Camp) All American in both 2000 and 2001; Consensus All BIG EAST in 2000 and 2001; 2001 Big East co-Defensive Player of the Year; named 2001 National Defensive Player of the Year by the Football News; 2001 Jim Thorpe finalist; 2001 Bronko Nagurski semi-finalist; 1999 All BIG EAST second team; 1998 Freshman All American by the Football News and Sporting News

Ed also excelled at track & Field, winning the javelin competition at the 199 BIG EAST Outdoor Track & Field Championships.  He graduated Miami with a degree in Liberal Arts and was drafted in the first round of the 2002 NFL draft by the Baltimore Ravens (24th overall).  He is an 8 time Pro Bowl selection, 5 time All First Team Pro Bowl selection, named the 2004 NFL Defensive Player of the Year by the Associated Press, Ed is the NFL's active leader in interceptions and interception return yards.

Ed Reed will become Miami's 8th football player, and 11th overall member, of the College Football Hall of Fame when he is inducted as a member of the Class of 2018.

Ed completed the TRIFECTA of Hall of Fames...UM Sports Hall of Fame, College Football and Pro Football...when he was inducted into the Pro Football Hall of Fame in Canton, Ohio on Saturday, August 3, 2019.  In December, 2019, Ed was named as one of safeties to the NFL's 100-Year All-Time Team !