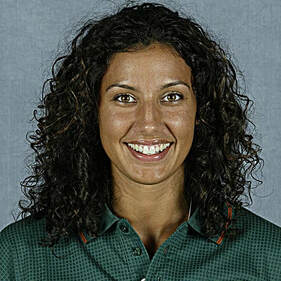 Dr. Jenny Krawec, the first member of Miami’s rowing program to be inducted, certainly had the pedigree to succeed in the sport, as her father, Walter, was a member of the 1976 Canadian Olympic rowing team.  Jenny, a multi-sport native of St. Catharines, Ontario, competed in soccer, cross-country, volleyball, basketball and rowing, and had already won numerous gold medals in rowing, including at the 2001 Canada Games in the Women’s Pair and Women’s Four.

Krawec would go on to become the most decorated rower in Miami program history.  A two-time Most Valuable Player (2001, 2002), she was named second team All-American by the Collegiate Rowing Coaches Association (CRCA) in both 2003 and 2004 in the Women’s Varsity Eight.

She was also named NCAA All-South first team in 2002-2003 and CRCA first team in 2003-2004.  She is still the only person in program history to be named to an All-American team.  In 2004, she was named the Bowman Foster Ashe Outstanding Female Student-Athlete at Miami.
​
She is currently a Clinical Assistant Professor in the School of Education and Human Development at the University of Miami.  She received her Bachelor of Science in Education (2004), Master of Science in Education (2008), and her Doctor of Philosophy in Education (2010), all at Miami.
​