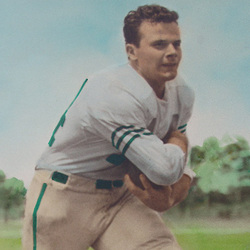 Dr. Harry Mallios' relationship goes back over forty years.  He played football for the Hurricanes from 1949 to 1953, starring on two powerful UM bowl teams.  Dr. Mallios, a Marine Corp veteran of WWII, was know as the "Scooter" and became one of the great running backs in Hurricane history.

Dr. Mallios received his Ph.D from the University of Miami in 1970, was a tenured member of the UM faculty, served as an Assistant and Associate Athletic Director, and was the Athletic Director for the Hurricanes from 1979 to 1983.  He was appointed Faculty Athletic Representative to the NCAA in 1983 until his retirement.

In October, 2010. he was honored as a Miami Sports Founder by the Greater Miami Chamber of Commerce.