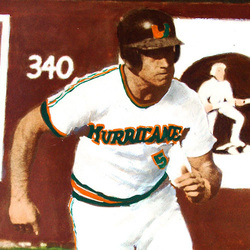 Doug Shields was an ace defensive centerfielder for Ron Fraser's Hurricanes from 1981 to 1984 and was equally impressive with his bat.  In 1984, Shields won the Sun Bank Trophy (UM's MVP as voted by the Miami coaches), the Arnold Novens Memorial Trophy (UM's MVP as voted by Miami fans), and the Tony Roma's/Ron Fraser Post Graduate Scholarship Award (for superior achievement in academics and athletics).

Shields was selected by the Montreal Expos in the 1984 Major League Baseball draft. However, a knee injury cut short his pro aspirations.  He currently works in a family-owned roofing business and lives with his wife Vicki in Tampa.