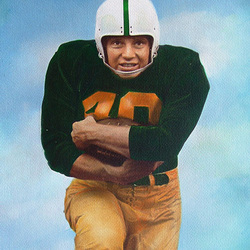 Don Bosseler was a four-year starter at fullback for the University of Miami. In his senior year, 1956, he helped the team to an 8-1-1 record, was named All-America by the Associated Press, and was MVP in the Senior Bowl. Miami placed sixth nationally, its highest ranking until the 1983 national championship season. Bosseler was recruited out of Batavia, New York, by Andy Gustafson and he joined Gustafson, his old coach, in the College Football Hall of Fame in 1990. "Being chosen for the Hall of Fame is meaningful," he said. "It is the epitome of going to college and playing the game. I am highly honored." He rushed for 1,642 yards in his four years. Then came seven years with the Washington Redskins. After his football days, he joined Prudential Bache in Miami and became a vice-president.

Don's Biography from his induction into the Buffalo Sports Hall of Fame...

The face of the University of Miami football program in the mid-1950’s, Don Bosseler was as familiar to Hurricane fans as Elvis was to teenage music lovers and James Dean was to movie buffs.
Asked to comment on Bosseler, legendary running back Doc Blanchard once said, “Bosseler is a very impressive young boy.”
And this from the University of Miami – “If Norman Rockwell had to paint a picture of a football player, it would be Bosseler. At 6-1 and 212 pounds, he was big, muscular and sported a blond crewcut. His nickname was “Bull”, and as a fullback, he preferred to run over tacklers rather than go around them.”
From Wethersfield to south Florida to the NFL, Don Bosseler left an impressive list of achievements in his wake. A product of Batavia High School, Bosseler went on to become a four-year starter at Miami and served as a team captain, while rushing for 1,642 yards. He was a first team all-American in 1956 (Jim Brown and Johnny Majors were also in that backfield) and was named MVP of the Senior Bowl when he rambled for 187 yards. Miami was 8-1-1 during his senior year and ranked sixth in the country. To top things off, the “Bull” also started at linebacker and led the Hurricanes in tackles.
Bosseler was drafted with the ninth overall pick in the 1957 NFL draft with legends Paul Hornung, Jon Arnett, John Brodie, Ron Kramer, Len Dawson and Jim Brown being selected just ahead of him. A Pro Bowl pick in 1959, Bosseler was voted one of the 80 Greatest Redskins of all time. During his eight seasons and 96 games in Washington, Don rushed for 3,112 yards and 22 touchdowns.
Hall of Fame inductions are nothing new for Bosseler, as he is a member of the prestigious College Football Hall of Fame (inducted in 1990) and the Florida Sports Hall of Fame (2000) and is included in Miami’s “Ring of Honor.”
Upon his retirement, he became a Vice-President of Prudential Bache. He currently resides in south Florida.