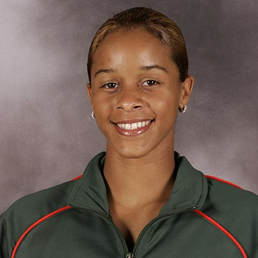 Some people collect coins or trading cards or autographs…for Dominique Darden, collecting track honors has been a lifetime pursuit.  She holds the distinction of being the Miami track program’s most honored All-American, earning that distinction 15 times.   But before she got to Coral Gables, she was already successful, holding the Pennsylvania state record for most track Gold Medals with 15, along with setting three state records while at Harrisburg (PA.) High School.

Once at UM, she would become a workhorse for UMSHoF member Coach Amy Deem, competing in at least seven individual events and numerous relays over her career.  As a freshman in 2003, Dominique earned All-American honors as a member of both the indoor and outdoor 4x400-meter relay teams and the outdoor 4x100-meter relay team.  She would also help win the 4x400-meter relay at the Big East Championship.

For her Miami career, Dominique was named an Outdoor All-American 10 times, four more than the next best, and five times as an Indoor All-American, just one shy of the most in school history.  She also claimed five outdoor and three indoor conference titles, while the Hurricanes walked off with both the indoor and outdoor conference championships in all four years (2003-2006).  She was truly a key performer for the Canes, competing in seven individual events as well as the relays.  She left Miami owning school records in the indoor 400-meter (52.17) and outdoor 400-meter hurdles (55.27), although both have since been eclipsed.

In 2009, she won the 400-meter at the USA Indoor Championships and in 2013 was inducted into the Pennsylvania Track & Field Hall of Fame, joining her father, Tony Darden, as the only father-daughter duo inducted.  Dominique graduated Miami with a Bachelor of Business Administration and currently works for Team Hennessy in Miami.