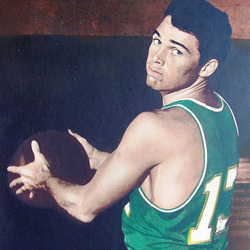 Dick Hickox, one of the smallest athletes ever to play for the Hurricanes , is a member of the All-Time University of Miami cage team as a guard !  He was the school's first All-American!

Only 5 feet 6 inches tall, Dick had amazing speed, sensational dribbling and drive-in ability and was a deadly shot from any distance-including the free throw line.  In his time at Miami, back before 3-point field goals and the shot clock,  he was the first man to lead the team in scoring for three years, since the late John Tobin did it in the pre-World War II era.

Hickox finished up at Miami as the career leader in total points, free throws, field goals and most 20-point games.  A terrific all-around player, he just missed being in the top ten in rebounds.
Despite his size, he was a brilliant rebounder because of his speed and quickness of reaction.  Any basketball that wasn't gobbled up off the rim was fair game for the fast moving Hickox.

Playing in the days before freshman were allowed to participate, Dick was named all three years to the UPI first team Little Man All-American team.  He was named a Associated Press First Team All-American in 1959-60 when he averaged 22.1 points per game.

Dick came to Miami from Northside High in Fort Wayne, Indiana, by the way of Hancock Junior College.  Following  his Hurricane career, he was drafted into the pro ranks by the Kansas City Steers of the American Basketball League, playing one season, but military service intervened.  He led his military team to victory in the Military Olympics in Athens, Greece in 1963.   He was later the freshman coach at UM in then returned to Fort Wayne as a physical education teacher for 2 years.  When Ron Godfrey was named UM basketball coach, in 1967, Hickox returned to Miami as an assistant coach, holding that position until the program was dropped after the 1970-71 season.

Dick served for many years as the head basketball coach at four Miami area high school's, being named Coach of the Year in 1983 while at Gulliver High School.   He remained close to the university, including serving on the executive committee of the UM Sports Hall of Fame until his death in 2006.  He was selected as a member of the Indiana Basketball Hall of Fame in 2009.