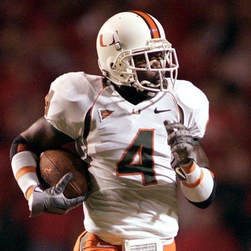 To say that Devin Hester was one of the most electrifying and explosive all-purpose players in UM history might be the understatement of the century.  A triple threat on offense, defense and special teams, he could do it all.  A Parade and USA Today All-American, and the Number One football prospect in the state of Florida, he came from Suncoast High School in Riviera Beach ready to excite the Orange Bowl crowd.

Who can forget him taking the opening kickoff in 2003 against Florida and streaking untouched for a 97-yard touchdown return.  He would finish that freshman season with 517 kickoff return yards, the third highest season total in school history.  Just for good measure that Spring, he won the 2004 Big East Indoor Long Jump title in track.

The 2004 football season would make the nation take note of his game-changing abilities.  He would set a school record with four return touchdowns (three punts and one kickoff), including a school record-tying 100-yard kickoff return against N.C. State and a record-tying 92-yard punt return versus La. Tech…his 2nd punt return touchdown of the game.  Though most teams kicked away from him during the second half of the season, he finished ranked fifth nationally with a 17.2 yard average on punt returns and ninth in the NCAA with a 26.9-yard average on kickoffs.  Playing nickel back on defense, he led the team in interceptions (4) and sacks (4).  Hester was named a 2004 All-American by the Football Writers Association, Walter Camp Foundation and The Sporting News, as well as first team All-ACC as a kick returner.  In 2005, fearing his ability to score, teams consistently kicked away from him.

Selected by the Chicago Bears in the second round of the 2006 NFL Draft, Devin would become the greatest return specialist in NFL history, setting records for most punt returns for touchdowns (14), and total special teams touchdowns (20 – 5 kickoffs, 14 punts, 1 missed field goal).  He was a four-time Pro Bowler in his 11 seasons with the Bears, Atlanta Falcons, Baltimore Ravens and Seattle Seahawks.  Now retired, he and his wife, Zingha, have three boys: Devin Jr., Drayton and Denali.