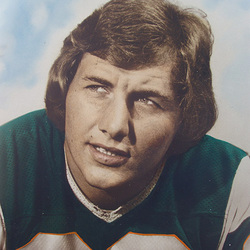 A consensus All-American as a senior in 1974, Dennis Harrah is considered one of the greatest offensive lineman to ever strap on the shoulder pads for the University of Miami. During his playing days at UM, Harrah was described as "the best offensive lineman I've ever coached," by Hurricane offensive coordinator Carl Selmer who had previously served as an assistant to Bob Devaney during the national championship era at Nebraska.

The 6-5, 259 pound native of Charleston, West Virginia covered 40 yards in 4.8 seconds while at Miami, and was notorious for his durability and toughness. He was rarely on the sidelines for a single snap throughout his entire college career (1972-74).

Harrah was a keystone on the Los Angeles Rams' offensive line for 13 seasons, earning All-NFL status twice, while making five trips to the Pro Bowl. One of only a few professional athletes who can make a claim of "going out on top," Harrah retired after the 1987 season and played his final game in the 1988 Pro Bowl. One of only a handful of former Hurricane players who has participated in the Super Bowl, Harrah's Rams faced off against the Pittsburgh Steelers in Super Bowl XIV in Pasadena.