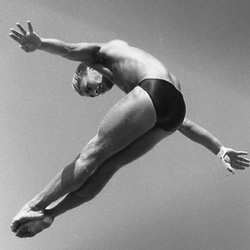 Dean came to the University of Miami from Knoxville, Tennessee in 1991 after competing and placing in the 1 meter, 3 meter and Platform diving competitions at the Junior National Championships.  Dean continued his winning ways at the University of Miami, being the 1991 and 1992 NCAA 1 meter diving champion and in 1993 winning both the 1 meter and 3 meter championship.

Dean graduated from the University with a degree in Business Administration.  Dean currently lives in Los Angeles, California and works as an agent.