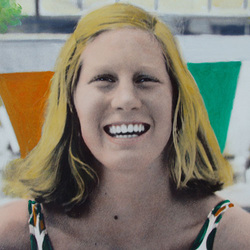 During the 1970's, women's swimming was one of the top sports at the University of Miami, winning national titles in 1975 and 1976. One of the top swimmers on those two teams was two-time National Champion and seven time All-American Dawn Frady. Frady won her two national titles in the 200 and 400-yard freestyle, both coming during the team's first national championship season in 1975.