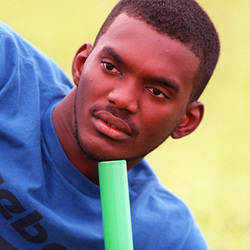 Davian Clarke, a two-time NCAA national champion and 6-time All-American, left his mark on the University of Miami's men's track program.  He was raised in Spanish Town, Jamaica and moved to the U.S. in 1993 to attend Piper High School in Sunrise, FL, where he won the state title in the  400 meters. Once he stepped on the Coral Gables campus, the  accomplishments would continue
to roll in.

After graduating with a degree in Business Administration, he continued his international sprint career, winning 8 medals for his native country,
including a Gold Medal as a member of the 4x400 meter team at the World Indoor Championships.  He retired from competition in 2007.