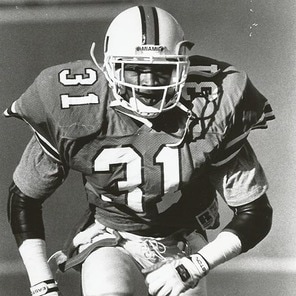 The old adage “offense gets headlines, defense wins championships” was so true for the Miami Hurricanes of the late 1980’s and early 1990’s. While the quarterbacks and wide receivers made the news, it was the UM defense that dominated college football and led to title games. Darryl Williams was one of the best defensive backs that Miami ever produced. Out of Miami’s American Senior H.S., he was an All-State DB who also excelled in track and field, once soaring 6’-10” in the high jump.

At Miami in his true freshman year of 1989, Darryl collected his first career field goal block against FSU, part of a defensive unit that led the nation in total defense en route winning the school’s third National Championship. As a junior in 1991, Williams once again struck at the heart of the No. 1 ranked Noles, collecting 18 tackles (10 solo) and was named the player of the game that Miami won 17-16 in the classic now known as “Wide Right 1.” He also was named ABC defensive player of the game in the nationally televised showdown against the No. 9 Penn State Nittany Lions. For the season, he led the secondary with 84 tackles (49 solo) with three interceptions that included a 27-yard TD return against San Diego State.

Following the 1991 season, Darryl was named First Team All-Big East and First Team All- American by the Associated Press, by Kodak and by the Walter Camp Football Foundation. He was also a finalist for the Jim Thorpe Award, given to the best defensive back in college football.

Drafted after his junior year by Cincinnati with the 28th pick in the first round of the 1992 National Football League Draft, he spent 11 seasons in the NFL; two stints with the Bengals (1992-95 and 2000-01) and with the Seattle Seahawks (1996-99). In 1997, Williams recorded three interceptions against San Diego, was the AFC’s co-leader in picks with eight, and was named to the Pro Bowl. In 1998, he also tied a then-NFL record with three fumble recoveries in the Kansas City game.
​
Williams and his wife Marlina have three children; Darryl, Jr., Mark and Maya. He is currently coaching safeties at St. Thomas Aquinas H.S. in Fort Lauderdale where he has been a part of the last four FHSAA 7A State titles, including three of those with his sons, Darryl, Jr. and Mark. Recently, he has returned to UM and is finishing work on his degree in Business Management.