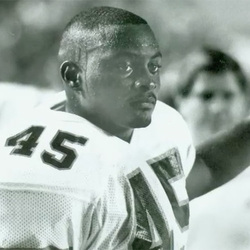 Smith along with fellow Hurricanes linebackers Michael Barrow and Jesse Armstead formed one of the greatest linebacking corps in college football history called The Bermuda Triangle.  The Bermuda Triangle, playing together from 1990 to1992, were an integral part of Hurricanes teams that had a 29-game winning streak and were named the 1991 National Champions (12-0) by the AP.  The 1991 Hurricanes were a dominating defense that led major college football in average points allowed per game with an amazing mark of 9.1 ppg including a 22-0 shutout of Nebraska in the 1992 Orange Bowl. The 1991 University of Miami National Championship team was a highly decorated group and it was Smith who was one of their biggest leaders on the field, in the classroom, and in the lockerroom.

On the field, Smith was known for his quiet confident play revolving around his great speed which allowed him to always be around the football.  Smith, the 4th-leading tackler in Hurricanes history, was a highly decorated player during his four playing years at Miami being named two-time first team All-American as a Junior and Senior (1991 - UPI, Football News and 1992- UPI), 2nd team All-American (1991- AP), 1st team All-BIG East (1992), BIG EAST co-Defensive Player of the Year in 1992, and a two-time Butkus Award semi-finalist. Most Canes fans will probably tell that Smith's greatest collegiate game occurred in Miami's memorable 17-16 win over Florida State in Tallahassee, FL on November 16, 1991 which will forever be known as Wide Right I.  In the Hurricanes' huge win that propelled them to the 1991 National Championship, Smith had an amazing 18 tackles (ten solo).

Academically, Smith stayed five years at the University of Miami (redshirted first year) so he could maximize his educational opportunities at the school. He earned his undergraduate degree in business management in just three and half years then completed his masters degree in marketing in his final year of eligibility.  In recognition of his hard work within the classroom, Smith was named the National Football Foundation and College Hall of Fame Scholar-Athlete recipient for 1992.  Smith, a former Little Brother from the Big Brothers organization, also took the lessons he learned from former Hurricanes like linebacker Bernard Clark to mentor several Hurricanes� teammates too.  Smith and his 1992 Hurricane teammates also played a big part in helping to lift the spirits of the South Florida community after 1992s devastating Hurricane Andrew.

After his illustrious career at the University of Miami, Smith was selected by the Dallas Cowboys in the 2nd round of the 1993 NFL Draft joining several former Hurricanes including head coach Jimmy Johnson, receiver Michael Irvin, defensive tackle Russell Maryland and others on the Cowboys team.  Smith made an immediate impact, starting as a rookie at the weakside linebacker position on the Cowboys Super Bowl XXVIII winning squad.  The hard-hitting tackler went on to play four years for the Cowboys with highlights including winning another Super Bowl ring (SB XXX) and reaching 100 tackles or more twice.  Smith went on to play a total of 12 years in the NFL, playing for the Cowboys, Philadelphia Eagles, Seattle Seahawks, and New Orleans Saints while finishing with career stats 788  tackles, 24 sacks, and 11 INTs.

After his professional football playing career was completed after the 2004 NFL season, Smith returned to the Miami area, where he still resides today.  He completed his second Master�s Degree (Real Estate Development) at Nova University and is now operates a real estate investment/development company.  Smith, when not busy with his burgeoning family and business, is active in several community related activities including the Fellowship of Christian Athletes organization.  Smith also has recently taken on the additional challenge of tackling literacy in the South Florida area with his Project 59 program, which specializes in encouraging young people to read.