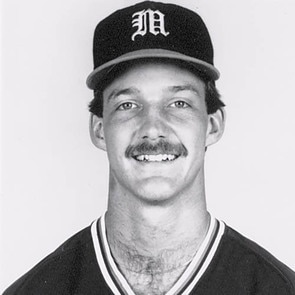 Dan finished 1985 with a 15-2 record and a 2.66 earned run average, named the team’s Co-MVP with UMSHoF member Rick Raether. In 22 starts, second-most in UM history for a single season, Dan struck out 105 batters in 138 innings and tossed three shutouts. He won 14 consecutive decisions, including two wins over Florida State and had victories over Florida, Alabama and Southern California.

In 1986, he started out with a stellar 9-0 record, but developed arm and shoulder problems and finished 9-3 for a total of 41 career victories. Before his medical problems, Davies won 24 of 25 decisions, including a 1986 Opening Day rematch victory over Texas, the team Miami beat for the national title at Omaha the preceding season.

In 1986, Dan was Tapped for Iron Arrow, the highest honor one can attain at the University of Miami, and graduated with a Bachelor of Business Administration degree in Marketing. He was selected in the 8th round of the 1986 Major League Baseball Draft by the Cleveland Indians. He currently lives in Marathon, FL where he works with his family’s business, Captain Hook’s Marina and Dive Center.