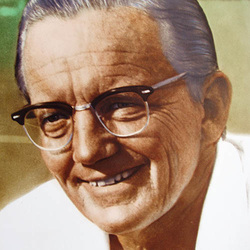 Dale Lewis was one of the winningest coaches in intercollegiate athletics in the United States,on any level, and his mastery of the college tennis spanned a 22-year career at the University of Miami. During that time the University  of Miami won a total of 364 dual matches, while losing on 35, for an amazing 91.2% winning percentage. Only three of Lewis' Hurricane squads failed to finish in the Top 10 national rankings and his teams posted the longest winning streak in the history of intercollegiate tennis. From 1958 to 1964, Lewis' Hurricane teams posted 137 straight victories in dual match competition.

During his tenure as the head coach for the Hurricane tennis program, Lewis guided the careers of more than two dozen Hurricane netters who went on to earn All-American recognition. The top names among his more noted players are Eddie Dibbs, Jamie Fillol, Pat Cramer and John Hammill. Prior to his arrival at the University of Miami, in 1958, Lewis lead Indiana University to three Big Ten Conference tennis championships. Dale Lewis will go down in history as one of the winningest coaches, in any sport, in intercollegiate history.