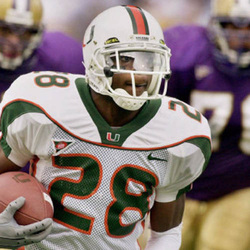 Clinton Portis came to Miami on the fast track to stardom. After rushing for more than 2,000 yards as a senior at Gainesville High School, he was named the Gainesville Sun Football Player of the Year, All-State, USA Today honorable mention All-American and All-State in track as a member of the state record setting 4x100 relay team. It was a sure thing to expect his speed would befuddle opponents as much as it would dazzle Hurricane fans.

Portis burst on the scene as a freshman in 1999, carrying 27 times for 147 yards and a touchdown in his first start against East Carolina. He would set a UM freshman record by recording five 100-yard rushing games on his way to leading the team with 838 yards on 220 attempts, a 6 yard per carry average, and scoring 8 touchdowns. Clinton capped the year by setting a UM Bowl Game record for longest run from scrimmage with a 73-yard TD in Miami's 28-13 Gator Bowl victory over Georgia Tech. He was named a Freshman All-American by The Sporting News. In 2000, Portis played a reserve role, rushing for 485 yards on 77 carries, a 6.3 yard average. In the Sugar Bowl game against arch rival Florida, Clinton entered the game in the second half after the starter was injured and led the Canes to victory by rushing for 94 yards in the half, including the game-clinching 35-yard touchdown run. It was a sign of great things to come. The 2001 season saw Portis as the established starter and he did not disappoint, dominating opposing defenses by racking up 1,304 yards on 240 carries (5.4 avg) and 11 touchdowns. He highlighted the season with 104 yards on 20 carries and a 39-yard touchdown in the 2002 Rose Bowl National Championship game against Nebraska. Clinton rushed for 100 yards or more in 9 games, the only ones he didn't were blowout wins over Rutgers, Troy State and West Virginia, where reserves took over. He also caught 16 passes for 151 yards and a touchdown. Portis showcased his talents with big games against highly ranked Penn State (164 yards on 17 carries) and Florida State (122 yards on 17 carries). His 36 carries (for 160 yards) against Boston College are the 3rd most attempts in school history. For his career, Clinton rushed for 2,523 yards (4th most) on 440 carries (8th most) and is tied with UMSHoF member Edgerrin James for the school record with 14 career 100-yard rushing games. His 21 career rushing touchdowns in 8th most, and his nine 100-yard games in 2001 is the 2nd most for a season. Portis also ran track at Miami, specializing in short sprints and was a member, along with fellow UMSHoF inductee Andre Johnson, of the BIG EAST champion 4x100 yard relay team in 2000-2001.

Drafted by the Denver Broncos as the 51st overall pick of the 2002 NFL Draft, Clinton was named the NFL Offensive Rookie of the Year by the Associated Press after running for more than 1,500 yards that season. He spent two years in Denver before being traded to the Washington Redskins, where he spent seven seasons (2004-2010) and ending his career with just under 10,000 yards rushing. In 2012, Portis was named, along with UMSHoF member Don Bosseler, as one of the 80 Greatest Redskins in the franchise's first 80 seasons. Clinton appreciates the support he received from his parents, Rhonndl Hearn and Leonard Pearson, who attended all his games from his childhood through his Miami days, and Jamillah Wade, the mother of his four sons, Chaz, Chasten, Camdin and Casin. He currently serves as a football analyst for the ACC Digital Network.