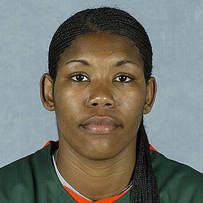 When Chanivia Broussard faced the decision where to play collegiate basketball, she could have chosen to play at numerous schools across the Southeast. But the Miami Northwestern High School product, who was an All-American Top 20 senior and a first-team All-Miami Dade County selection, chose to stay close to home and attend Miami.  That was a good choice for her and the Hurricanes.

As a freshman in 2000-01, “Nivie” led the Canes in scoring (13.2 points per game), registering double digits in 22 of 27 games she played.  She would be named to the All-Big East Freshman squad following the season.  She matched her rookie year by leading the team in scoring (14.2 ppg) as a sophomore, again hitting double digits 19 times while being honored as second team All-Big East selection.  As a junior in 2002-03, she played the role of “6th man” for UMSHoF member Coach Ferne Labati, but still contributed 9.4 points per game and became only the 15th Hurricane to eclipse the 1,000 point mark for her career.

Broussard saved the best for last, teaming with UMSHoF member Tamara James, the duo leading the Canes to a 22-7 record and a berth in the NCAA tournament.  Broussard averaged 15.1 points and 6.2 rebounds per game, scoring in double digits in 24 games and recording three “double-doubles.” She had her “career game” with 32 points, on 15 of 20 shooting, and nine rebounds against Richmond.  She was honored as a third team All-Big East selection.

Chanivia graduated from Miami with a Bachelor of Liberal Arts degree.  After testing the  professional waters of the WNBA and international basketball, she returned to Miami where she and her family opened a restaurant and catering business in Miami Gardens, Tasty Soul Food.  “Nivie” and her husband, Fred Carey take care of their children; Calvin Russell III, Cai Carey and Cash Carey