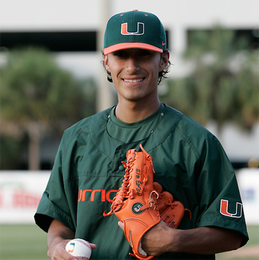 Everyone likes to make a good first impression.  For right-handed pitcher Cesar Carrillo, his introduction to UM and to college baseball was long and lasting – extending nearly 2 years as he started his Miami career with 24 consecutive victories. That was the longest streak in school history, and one shy of the all-time NCAA record.

In 2004, Cesar went 12-0, with 2 saves, a 2.68 earned run average (ERA), and 91 strikeouts in 113 innings pitched.  Carrillo would pitch a complete game 3-1 victory over the Florida Gators in the Super Regionals to clinch Miami’s 21st trip to Omaha and the College World Series.  He was named a third team All-American by Baseball America for that season.

Cesar came back in 2005 and continued where he left off …winning his first 12 decisions to move to 24-0 in his career.  He would end the season with a 13-3 mark and a minuscule 2.22 ERA, and 127 strikeouts against only 23 walks, in 125 innings pitched.  For his efforts, Carrillo was named first team All-Atlantic Coast Conference (ACC) and selected as the ACC Pitcher of the Year.  He was named first team All-American by the National Collegiate Baseball Writers Association, and a 3-time second team All-American by the American Baseball Coaches Association, Baseball America, and Collegiate Baseball.  He was also a semi-finalist for the Roger Clemens Award that honored the top college pitcher of the year.

Cesar was selected in the first round (18th overall pick) in the 2005 Major League Baseball (MLB) Draft by the San Diego Padres.  Along with Ryan Braun (taken 5th overall), it was the first time that two Hurricanes were selected in the first round of the MLB Draft.  Carrillo would make his MLB debut on August 13, 2009 against the Milwaukee Brewers, becoming the 6th member of the 2005 Miami Hurricanes to make the Big Leagues.  Cesar is currently playing professional baseball in Mexico.