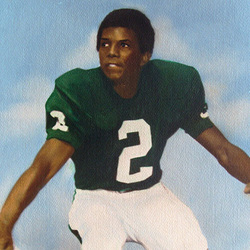 New head coach Fran Curci tabbed Owens as a promising sophomore who would be worked in gradually. He debuted in the opener against William and Mary and by the Florida State game, on October 30, 1970, he was the starting cornerback and was never to be dislodged. Miami improved in 1971, but still stayed below .500 , despite the gallant efforts from Owens. He returned 10 kickoffs for 150 yards, and had 5 interceptions, which placed him in the UM record books at 6th for single season interceptions. Owens was a stalwart on defense that year and was named the the Associated Press All South Independent team.

Owens was the keystone to the 1972 Hurricane defense which held it's opponents to under 200 points for the first time in several years. He boosted his career interception total to 8 which put him in the top 10 for career interceptions. For his flawless defensive play he was honored as a first team All-American.

Capping his collegiate career Owens was drafted by the New York Jets where he played several years and then moved on to the Oakland Raiders where he finished a stellar NFL career.

He became the first African-American student-athlete inducted into the UM Sports Hall of Fame in 1982.

Burgess Owens was elected to the United States House of Representatives from the state of Utah in November, 2020.