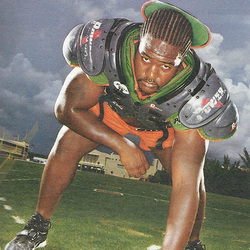 Bryant McKinnie was one of the most dominating offensive lineman in Miami Hurricanes history.  He came to The U from Lackawanna Junior College in Scranton, Pa. after playing defensive end and lettering in track at Woodbury (N.J.) High School.

A Consensus All America in 2001, he joined UMSHoF member Russell Maryland as the only Hurricanes to win the coveted Outland Trophy, given to the nation's top interior lineman.  He also won the Jim Parker award, given to the top offensive lineman, and was named the CNN/Sports Illustrated Player of the Year.  McKinnie was a unanimous First team All BIG EAST selection and finished 8th in the Heisman Trophy balloting, with 26 first place votes.  McKinnie, who never allowed a sack during his college career, anchored the Canes offensive line that averaged 5.3 yards per rushing attempt and 43 points per game on the way to an undefeated season and the National Championship.

As a junior in 2000, he was named a unanimous All BIG EAST selection and first team All American by the Football News.  He made a name for himself in Miami's 27-24 victory over arch rival Florida State by shutting down the Noles' Jamal Reynolds, the eventual Lombardi Award winner, to just one assisted tackle in the game.