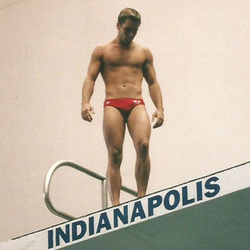 Bryan Gillooly came to Miami with a resume' that few could match, having won a record 15 Junior National Championships as a member of Team Orlando Diving, and being the only diver in the State of Florida to claim four state titles, when he dove for Gateway High in his hometown of Kissimmee ! Coach Randy Ableman was certainly ecstatic to add a diver of Bryan's caliber to the Hurricanes roster.

In his first year, Gillooly teamed with fellow freshmen Tyce Routson and Chris Mantilla to form one of the most prolific squads in NCAA diving history, as Miami became the first school to place first, second and third in an NCAA diving event, when they swept the 10-meter platform competition. He also won the BIG EAST title in the 1-meter springboard.

As a senior, Bryan won his second national championship when he claimed the 3-meter springboard competition.

He was a finalist at the US Olympic Trials in 1992, 1996 and 2000. Named a BIG EAST Academic All Star in 1996-97, he graduated with a degree in Business Management and Organization and currently works for YCF Diving in Orlando.