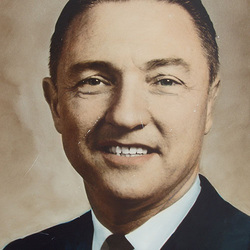 Hired in 1954 to lead the University of Miami basketball program, Coach Bruce Hale went on to become the winningest roundball coach in Hurricane history !  In 13 years at the helm, Hale racked up 220 victories against 112 defeats for a .633 winning percentage.

In the early 1960's, Hale guided the Hurricanes to their first three post season tournament appearances in school history.  The 1959-60  squad, led by Miami's first All-American Dick Hickox, qualified for the NCAA Tournament and finished the year with a 23-4 record.  Back then, only 16 teams qualified for the Big Dance. The following year, the Hurricanes advanced to the National Invitational Tournament and finished 20-7.  The 1962-63 squad, led by the hot shooting scoring briliance of sophomore Rick Barry, became the first team to win a post season game with a 71-70 victory over St. Francis (NY) in the NIT.

Barry, who went on to become UM's only consensus All-American selection in 1965, was the key figure behind Hale's 1964-65 squad which established a new NCAA team scoring record-averaging 98.4 points per game...this in the era before 3-point goals and the shot clock.

The engineer behind five of the school's first six 20-win seasons, Hale was recognized as one of the nation's leading offensive minded coaches during his years at Miami.

A graduate of the University of Santa Clara, Hale served as an Air Force Captain in World War II, where he was given his coaching start-leading the Wright Air Field Base to the service championship.

Following his stint in the service, Hale spent 10 years in the professional ranks as both a player and coach.  As a player for the Chicago Gears in 1945, he was selected to the All-World pro team.  The following year, he coached the Chicago squad to the national pro title.