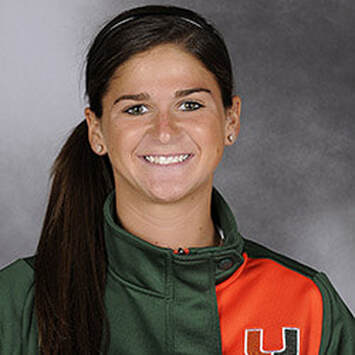 Brittney Steinbruch becomes only the second soccer player to be inducted into the University of Miami Sports Hall of Fame.  A native of Wyckoff, New Jersey, Steinbruch began scoring goals as soon as she arrived at Miami.  In her freshman season of 2007, Brittany led the team in points, goals, and game-winning goals with six. She was named ACC Freshman of the Year, and Miami's first-ever First Team All-ACC selection.

Despite missing time in 2008 due to injuries, she still led the Hurricanes that season with 8 goals and 16 total points. In 2009, she and the Canes pulled off the biggest upset victory in program history with a 1-0 shocker of #2 ranked, defending National Champion North Carolina at Cobb Stadium in Coral Gables. Though she didn't score the winning goal, she had 2 other shots on goal as the Canes went toe-to-toe with one of the nation's best squads.