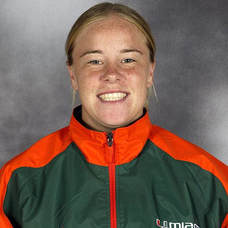 Very few athletes have traveled cross country to attend college as Britney Butcher did.  She took the 2,726-mile journey to Miami that ends tonight with her induction as the first soccer player to enter the UM Sports Hall of Fame.  Her journey from her hometown of Bothell, WA with credentials as a three-time King County first team selection at Bothell High School was well worth it.

Britney wasted little time getting accustomed to the Miami climate and to college soccer.  As a freshman in 2001, she was voted the team’s Offensive Most Valuable Player after scoring 24 points in 20 games (8 goals and 8 assists) and leading the Hurricanes to their first-ever NCAA tournament.  She was selected to the 2001 Big East All-Rookie team.  She repeated as Offensive MVP in 2002 with 34 points, including 16 goals in 19 matches.

Britney left Miami in 2004 as the school’s career leader in points scored (73), goals scored (29), shots on goal (192), and game-winning goals (7), and is still second overall in each category in UM history.  She is fourth overall in career assists (15) and tenth in career starts (68).  Her 16 goals in 2002 is currently tied as the school record for goals in a season, and her 34 points that year is still the second-best mark.

When asked to pick a specific moment in her UM career, she said, “Too many proud moments to list any.  No amount of personal accomplishments come close to the bond I have with each girl I played with, the coaches that came in my sophomore year and helped mold me into the person I am today, or the trainers that sacrificed their time to treat us.  We went through a lot in those four years and without this incredible group of people, I can’t be sure I would be who I am today.”

Britney, who studied criminology at Miami, currently is a project manager for Coulter Construction in Portland, Oregon