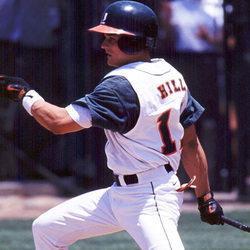 Bobby came to Miami from Leland High School in San Jose, California, where he was named All State while leading his team to the state championship, and turned down an offer from the Anaheim Angels, who drafted him in the 5th round. He immediately made an impact on Coach Jim Morris and earned "Freshman of the Year" honors while setting a freshman record for stolen bases, with 41, and a school record by being hit by 20 pitches...he showed he'd do anything to get on base.

In 1998, he set a school record with 87 runs scored, led the team with 97 hits, and also had a batting average of .404. He was named a First Team All American by the National Collegiate Baseball Writer's Association (NCBWA). He was selected to be a member of the 1998 U.S. National Team.  Bobby led the Hurricanes to the 1999 National Championship with a .391 batting average with 52 stolen bases. He was once again honored as a NCBWA First Team All American. Saving his best for last, Bobby went 2 for 2 with 2 walks, a stolen base and one run scored in Miami's 6-5 win in the Championship Game against Florida State. Overall in Omaha, he hit .533 with 8 hits in 15 at bats in Miami's 4 games, with 5 runs scored, 2 stolen bases, and was named to the All College World Series Team. Bobby was one of five finalists for the 1999 Golden Spikes Award, given to the nation's top college baseball player.

Hill remains the UM career leader in stolen bases (139), is 2nd in runs scored (240), and 3rd in hit by pitches (32). His overall career batting average was .360. He is in the Top Ten in career hits (253), career walks (166) and reached base in 97 consecutive games. He was drafted by the Chicago Cubs in the 2nd round of the 2000 Major League Baseball Draft, would make his major league debut in 2001 and spent 4 seasons with the Cubs and the Pittsburgh Pirates. He played on the 2006 U.S. Olympic Qualifying team and led the tournament with a .522 batting average.