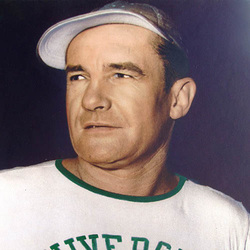 Billy Regan left Duluth, Minnesota in 1932 to attend the University of Miami, where he boxed professionally during his first 2 years.  As an undergraduate in 1933, he was tapped to become the assistant boxing coach, before taking the job of head boxing coach in 1934, a position he would hold until 1956 when the university dropped the program from intercollegiate competition.  He was assisted in 1937 by former World Heavyweight Champion Jack Dempsey.

During WWII, Regan was tapped to coach boxing at the Armed Services Rest Camp in Rome, Italy, where he served the country for two years.  He served as president of the Intercollegiate Boxing Coaches Association, and was Miami's Director of Boxing from 1946-1949.
Billy gained national recognition as a licensed boxing referee.  During his career he refereed 22 nationally televised matches and traveled around the country while working with the Golden Gloves committee.  In 1962, he served as the referee for the world heavyweight championship bout between Floyd Patterson and Ingemar Johansson in Miami when Patterson regained the title from Johansson.

Regan was a beloved coach whose boxers noted his pride in what they accomplished outside the ring academically, as well as their accomplishments in their careers and lives.