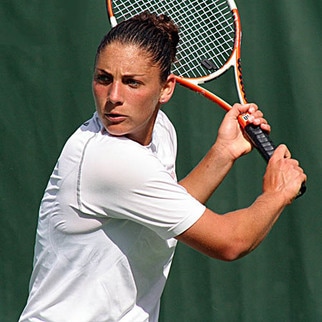 A native of Plantation, Fla., Audra Cohen was named the Miami Herald and Sun-Sentinel Player of the Year in both her junior and senior seasons for St. Thomas Aquinas H.S. She began her collegiate career at Northwestern, earning All-American honors in both singles and doubles. Cohen was named Big Ten Freshman of the Year, Athlete of the Year and capped her freshman year by reaching the NCAA Singles championship match. She finished the season with 51 wins tying her for third all-time in the modern era of NCAA Division I Women’s Tennis (since 1988).

Following her freshman year, Cohen transferred back to her home state to play at the University of Miami. Cohen compiled a 76-4 singles record during her time at The U. In her first UM season, she was named the ITA National Player of the Year, ACC Player of the Year, an All-ACC selection and a Honda Sports Award Finalist. She completed her rst season at Miami as the nation’s No. 1 ranked player and No. 2 ranked doubles team alongside teammate Melissa Applebaum. In addition, Cohen was named All-American in singles and doubles for the second time while being named to the All-NCAA tournament team at the No. 1 position. As a sophomore, Cohen was named the 2006 ITA and ACC Player of the Year following a record 42-2 season.

During the 2006-07 season, she became the first player in program history to win the ITA National Indoor Intercollegiate Championship and the rst woman to win the NCAA Singles championship. She was the No. 1-ranked college player in the country the entire season, concluding. her junior campaign by again earning ITA National Player of the Year and ACC Player of the Year accolades. Cohen was also awarded the 2007 Honda Sports Award for women’s tennis and was also honored by Miami-Dade County with “Audra Cohen Day” on June 29, 2007.

After leaving the tour, she began her collegiate coaching career in 2011 with the University of North Florida and in 2016 Audra became the head coach at the University of Oklahoma. Audra Cohen will always be grateful for the atmosphere of support and excellence she enjoyed at the University of Miami and wishes to thank her exceptional coach, Paige Yaroshuk-Tews and the entire U Family for the opportunity to build a career worthy of inclusion in the prestigious UM Sports Hall of Fame.